Just like I said and don’t make me repeat myself.

So I thought I made myself evidently clear last night that I wanted to say goodbye to this place and make a clean break but then again, I’m weak and a sucker for punishment so I’m back at Chaoz for one last round.

I’m still not sure what Hammer Liqueur is but I know it tastes damn good. I got turned on to this stuff here (I know, right?) that is what’s pictured above  (special shoutout to Jen as she mixed a double double with that one) and I have looked high and low but apparently it’s a Chaoz exclusive. In any event, I think we’ve come to the end of the road here.

Pictured above: the view I’ve seen from across the parking lot many of nights

I didn’t know that you could put a bar that close to a school but apparently I was wrong but then again not really. It’s not a school but rather a private preschool that’s located less than a hundred yards away from here. Nevertheless, I’ve looked in that direction many times and have always wondered about the placement. As I sat at the bar or maybe the slot machines, this is the view I’ve seen so many times.
More so than a bar, I think Chaoz was founded on an idea: bring random people together and let them figure out how to get along. Maybe that’s it? Did it really take me 8 years to figure that one out? I don’t know about that, but one thing that I do know is that it’s been just like the picture above says: A Learning Experience.

It’s kind of amazing isn’t it? The answer was right in front of our faces all along. The essence of Chaoz is A Learning Experience and that’s exactly what it’s been. Such a long time ago and so many memories which will never be forgotten: 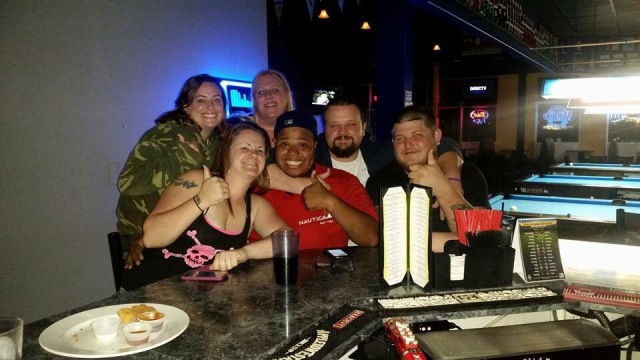 Pictured above: one last picture of some of us regulars on the last Saturday night of this state of mind that was Chaoz Sports Lounge
I have no idea of what will happen to the space that occupied 20631 West Renwick Road, Crest Hill, Illinois. Whatever it is, I’m sure that I’ll check it out but it won’t be Chaoz.

Chaoz is irreplaceable but eventually all bad things must come to an end…and there’s a Crüe song for that too…look it up.

Thank you so much for the memories Mike and Georgette. Best wishes to you in your future endeavors.

All my love, always, 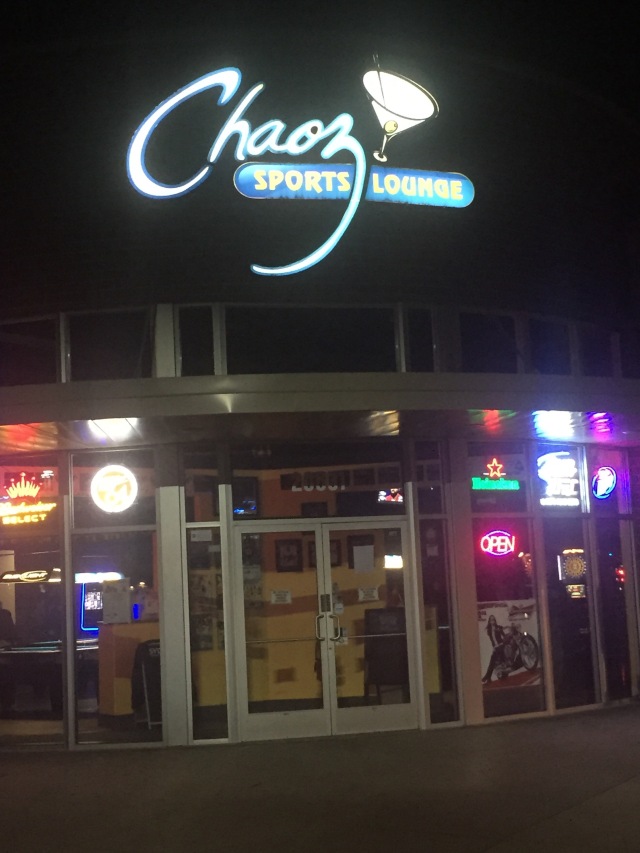 So I got some really cryptic news via the one source that really means anything to most of us…the home bar is closing. Of course, you can’t get all your news from Facebook despite what many of us think.  I don’t check in that much anymore because of a few reasons.

Much like the technological cycle, Chaoz has most likely run it’s course. In the beginning, there was Chaoz and eventually we made order out of it all. That has much more meaning for me because I was here in the beginning. In May of 2009, I first darkened the door, albeit as someone who was:

And that is an undeniable truth or something like it. Way back then, I was a different person and he died years ago. If you know a transgender person, then that statement makes sense. If you don’t know someone like that, look around, and if you find one and be respectful towards them as their life’s trajectory has most likely been infinitely harder than yours so be thankful for what you have.

Chaoz is a place that I come to to find peace and that might sound strange but it really isn’t because if you have ever been here, you know that it’s true. In the beginning, it was a rough place and I tried my best to play the part. While I put on the act of being a tough guy, that’s all it was. After a year, the facade came crashing down…I still remember the day I talked with Mike about the change in my appearance.

Ultimately, everything was cool that day. I was told not to worry about a thing because this (of all places) was safe and they held true to their word for a little while at least. Once, I came in and was told that there was an issue with me using the bathroom; in a bar, people need to use the bathroom, right? Maybe someday they’ll get it in Chicago but I seriously doubt it!

A simple task like using the bathroom takes on a whole new meaning for a transgender person. I’ll probably touch more on that issue later but for now, I want to talk about the home bar…that isn’t any longer and it won’t ever be again. When I started coming to this place, I was a different person as I believe so many of us were back then.  All it takes is a few years and you’ll see that people do change; trust me, I saw a few familiar faces tonight that I haven’t seen in years…still familiar but definitely changed. I have too.

How do things like this happen? What once was a rough and tumble roadhouse, has tamed over the years. I don’t have any problem being there or using the bathroom anymore. While some people when pressed might know the name I was once known as, for the most part, everyone only knows me as who I am today. Outside of this bar, nobody knows who I was, only who I am today and that’s really all I could have ever asked for. I will truly miss Chaoz as that was a sanctuary for me.

Many times, I walked (and stumbled) out of that bar, but no matter how much fun (or alcohol) I had, I always paid my tab at the end of the night; I never skipped out, until tonight. After 7 years, the streak has been broken but it wasn’t my fault this time. Tonight the power went out and I don’t believe that it was because someone didn’t pay their bill. Tonight instead of handing cash over the bar, I gave them my phone number…this can only mean one thing: I’m going to wind up there tomorrow!

It’s probably for the best as there’s probably more people I can or should say goodbye to. On second thought, I think I saw this movie earlier this summer but that’s a very twisted tale that I still haven’t figured out yet and probably shouldn’t even try.

I didn’t plan on making my way back down to Chaoz but I just might have to. Perhaps it’s a stay of execution. Maybe we’ll get another posting or maybe we won’t; I just can’t really say right now. If I don’t get the chance, I hope that you all had a great night filled with the sweetest of dreams.

Until we meet again,