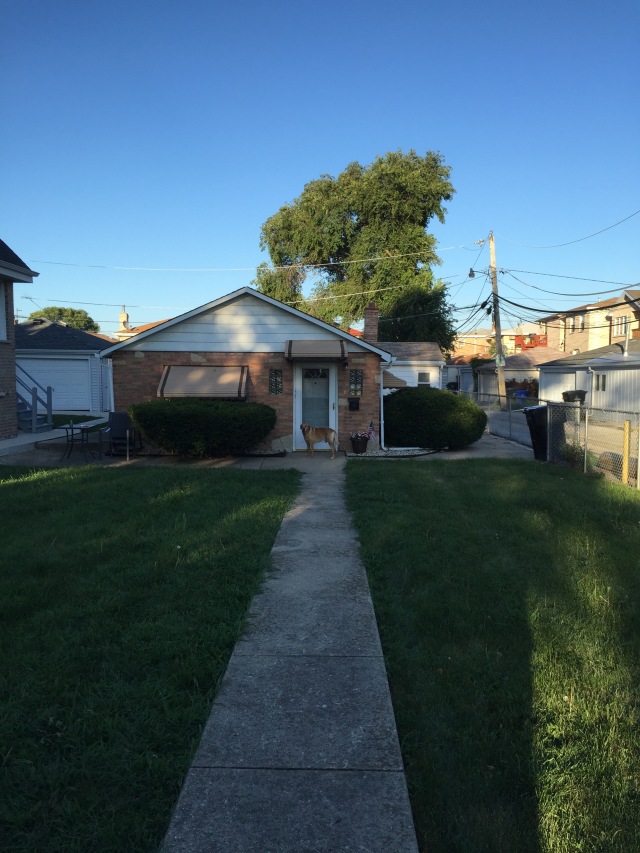 It’s closing time here on North Nordica. This house has been sold and it’s time to move out.  As it is after midnight when this entry is being published, today is the last day here, so it truly is last call.  We all know what happens when last call is announced…you belly up to the bar and get that one last drink, which is exactly what’s happening right now. If you’ve ever sold a house, you probably remember your last night there. While it’s not my house, I’m so very honored that I was invited to spend the last night here with my cousin B, who just so happens to be one of the best friends I’ve ever had.

B is actually my second cousin and while we have blood in common, it’s really not that much. If you’ve read previous posts, you know that I’m adopted (and unless you’re adopted, you will never understand what that feels like and that’s a good topic for later discussion). While I can’t speak for every adult adoptee, I think there comes a time in life when you question your existence and want to know about your roots. This summer I turned the ripe old age of 40 and continued that search.

A couple years ago, I finally met my birth mother face to face and that experience was less than exciting. I wanted to get to know my birth mother and have some kind of relationship with her but that was not to be. Maybe seeing her first born was just too painful for her and I can understand the cold shoulder that she gave to me. I don’t think anyone wants to be adopted as it really messes with your mind and development but more so than that, I’m sure that the main reason she and I are not communicating is because of the fact that I also happen to be transsexual…it’s a hard pill to swallow and I wouldn’t wish this degree of gender dysphoria on my worst enemy.

After many months of pleading with her, she finally revealed the name of my birth father. I found him in a matter of seconds but it took me 2 years to muster up the courage to contact him.  On my 40th birthday I finally decided to write him a letter and 2 weeks later, we met for the first time. I am so happy that I was able to make contact with him and I should really give him a call soon as we haven’t talked in a month but sometimes you just have to take things slow. This post isn’t really about him though.

One of the many strange things about being adopted is that the mother is usually searched for and found first. After all, we developed in her womb and that is a bond that shouldn’t be broken. The father is usually portrayed as someone who was there but not and is almost secondary even though he was responsible for 50% of our creation. It’s of little wonder why the birth father is the most silent of the adoption triangle…that is if you can call it that.

No dear readers, this is not a vignette about adoption although it might sound like it. This house in which I’m sitting in right now has become just that…a house. The couch that I’m sitting on is going out to the trash on Friday. Aside from a few cans of beer and a jello parfait (as a we remember my great grandmother who I never met), the fridge is empty. There are a few bins full of clothes that need to be sorted and some are going to storage. Other than that, it’s just B, myself and a large dog that constantly drools and sheds but we love him all the same.

Lastly, the television is here because can anyone really imagine life without it? While I’m writing this, a rerun of Doogie Howser is on…fitting isn’t it? At the end of the show, Doogie will write on his computer about the lesson he learned today.  It’s always something brief but poignant. I think right now I’m doing the same thing. Just like on Doogie Howser, there is a lesson to be learned here and I’m slowly getting there.

My birth mother did not want me to contact any of “her” family. However, what she failed to realize was that her family is also my family and I have every right to search out anyone that I want to. I’m so glad that I did because if I obeyed her command, I never would have met B and I would have lost out on a great friendship. Some friends come and go but this one is forever. Friends come in and out of your life so you should always cherish the time you have together because they might be gone tomorrow. Friends like B don’t come along that often and sometimes it’s a once in lifetime thing. Friends come into your life for reason, a season or a lifetime. The relationship that I’ve established with B is one of those lifetime things.

The backstory on this whole thing is this: over a year ago I connected some dots, matched a name and wrote to B on Facebook. I said that I had reason to believe that we were related and if she was interested in a friendship, she should write me back. In case you didn’t know, when you send a message to someone on Facebook and you aren’t friends, that message goes to the “other” inbox which most people don’t know about. It took several months, but in September, B found my message and wrote me back right away. Later that night, we talked on the phone for several hours and repeated that for many days after as not only did we want to know more about one another, we had a lot of catching up to do.

B and I are 13 months apart in age and among all of the grandchildren and great-grandchildren, the 2 of us are kind of alone because everyone else is either a lot older or a lot younger. B and I are Gen X through and through. In our first conversation, I figured out that had I not been given away, we would have grown up together. Her reply was “we would have been in the same playpen together.”

Going back to the house, this small place is where all of my birth mother’s family used to gather on holidays. Of course I wasn’t here though because I didn’t know any of them and spent all my holidays with my family. This little house on North Nordica so much more than a house…it was a home…a home in which one of my aunts and uncles raised their family of 5 children. Because I’m adopted, I missed out on all of those times and memories but luckily, I found B and now I have some memories of this home that I will never forget. Even though I have 2 bulging discs in my lower back which is causing a lot of sciatic nerve pain, the summer of 2015 has been one of the best ever because I’ve spent most of my free time in this house with B.
I worry about the future sometimes and I know B does too. Later today, we will lock the door on our way out for the last time. As we were moving some of her stuff to storage yesterday, she said “things are going to get better.” I admire that optimism and I hope she’s right. This was her home and she spent 41 years here…and that’s a lot of memories. It’s a tough thing to leave but eventually all things must come to an end and I know this is going to be very hard on her. I’m so grateful for our friendship and because she asked me to be here with her on the last night she’ll spend in the only place she’s ever known as home. We all need that proverbial hand to hold on to and I’m more than happy that I can be here for her.

It’s now very late (or early depending on how you see it) and it’s time to wrap this up and put it in the memory book. I have to get some sleep because there’s a few more things to move out of here. In the end, while I searched for my birth mother, I think I found exactly who I was supposed to find in B. I don’t know if my birth mother will ever come around and I really don’t care if she ever does but as Doogie Howser wrote in his journal a little while ago “the truth only hurts when you don’t tell it.” Maybe my birth mother will learn that lesson someday? I don’t know if shes strong enough to do that but right now I have bigger fish to fry. I just popped the top of my last beer of the night and it’s time to go so I’m going to sign off for now but I’ll leave you with this: